Thoughts And Reaction After Lecture on Presenting Data


In early October 2018, I attended a one day course on presenting data and information by Edward Tufte. Not long into the lecture I already felt inspired to take my data visualization game to the next level. In case you don't know, Edward Tufte is one of, if not the most influential figures in the realm of information design. At the time of this writing he has written four books on the topic and was called "The da Vinci of data" by the New York times. He is also a professor of political science, computer science and statistics at Yale. Before the lecture started, I had a feeling this would be worthwhile. Just five minutes in, I knew I was in the right place.

One of the first things we went over was examples of poor design. Tufte emphasized the point that humans are able to process an astounding amount of information at once, but if not organized well then it can feel overwhelming. He says it much more eloquently. Here are some of his best quotes...


What is to be sought in designs for the display of information is the clear portrayal of complexity. Not the complication of the simple; rather the task of the designer is to give visual access to the subtle and the difficult – that is, revelation of the complex.


We examined grouped bar charts with far too many categories than could easily be memorized which requires the reader to continuously look at the legend and then back to the graph while digesting the content. We looked at publications where paragraphs relating to charts were on completely different pages as an example of not considering the reader's accessibility to the information presented. It was at that time during the lecture that I thought about a report I had been working on and realized I need to make the sections within the report much more navigable.


The next time I worked on the report, I added a sidebar menu. It was written in R markdown and is comprised mostly of bar charts displaying weekly site metrics. The output is an html file that can be viewed offline. The sidebar menu now makes it much easier to review the charts in any order. 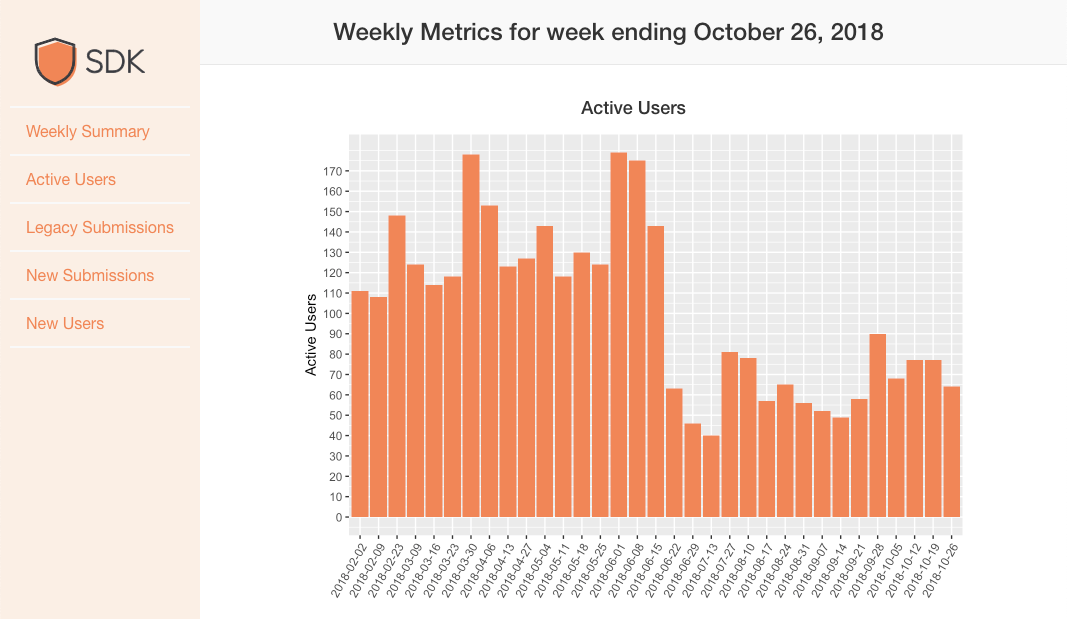 Presenting data in a way that makes it easy to digest, in this case with added emphasis on navigation, makes me thing of another quote from Tufte:


The best design gets out of the way between the viewer’s brain and the content.